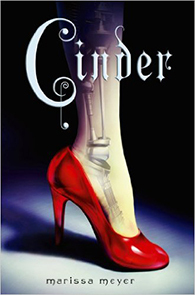 Take well-written sci-fi, fuse in some fairy tale redux, set your story in a dystopian society, cast a deadly plague and aliens on the moon into the mix, add action, adventure, and romance, and bam! Cinder. I so enjoyed this book and am thrilled that there are several other novels and shorts in the series.
Cinder is living in New Beijing 126 years after World War IV has ended. She lives with her stepmother and stepsisters and is deemed an outcast to society based on her status as a Cyborg, which seems synonymous with being a heathen (although being a cyborg sounds pretty dang cool to me). Cinder can’t remember anything before the age of 11 and lives a simple life as a mechanic with Iko the android as her designated best friend.
Cinder’s life changes pretty dramatically after her sister contracts the deadly plague. Oh, and she meets a handsome prince who is about to become Emperor.
This is a must read!